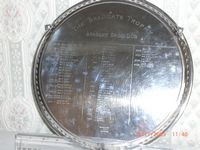 The Bradgate Plate (originally known as The Bradgate Trophy) was bought by the Club in 1975 for the sum of £41.84.

It is a pairs competition played over four weeks in November, with the best 3 scores to count.

The winner of this event is invited to represent the Club in Leicestershire’s Hyman Crammer Trophy.

The Trophy is inscribed with the names of the winners – there was clearly some confusion in the late 1980’s/early 1990’s between the Club’s minutes and the inscriptions – both are shown below.

This site uses Akismet to reduce spam. Learn how your comment data is processed.