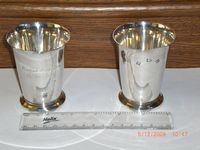 The Tyler Trophies were bought by the Club for the sum of £24 in 1973 and named after Mr. Howard Tyler, the Club’s first Chairman, “in thanks for his hard work and enthusiasm in starting the original bridge club.”.

The Trophies are played for in a pairs competition played over four weeks in February, with the best 3 scores to count.

This site uses Akismet to reduce spam. Learn how your comment data is processed.